Did you notice Josie in our recent Show Reel above, and how many times did you see her? Josie makes her debut appearance as the silent but deadly assassin in Jet Slade: Rise of the Black Hood. She also went through a vigorous training schedule for her character. Very into her fitness, Josie also has a background in Freestyle Kickboxing and has also participated in women's rugby.

Jet Slade: Rise of the Black Hood is filled with great and enthusiastic people, some of which have never acted before, but have gone on to pursue and study acting by joining casting agencies and partaking in their workshops. This film has really brought out the best in people, it's boosted their confidence, they've met and made new friends, some whom they probably would never have met... It has certainly been an eye-opener.
[Photos courtesy: Wag Doll]

Standing 5ft 8in tall Josie looked great in character, but it wasn't smooth sailing as a lot of hard work went into getting her to the stage she was at, which consisted of: Body conditioning, fight training and choreography and martial arts. Below are some more images of Josie.

Josie has finished filming all of her scenes for Jet Slade: Rise of the Black Hood, but it doesn't mean we just forget about her. By writing about our cast members, we still like to remind you and them that they are still part of this film project.
[Photos courtesy: Wag Doll]

Josie trained and worked really hard for her part, as you can see by the images above. She put in a hundred percent and it showed when it came to filming her scenes. A perfectionist, Josie would be aggressive yet sometimes a little too hard on herself in training, but it showed how determined she was to get it right. It was a way of channelling her inner demons. You would never expect this of her as her personality is placid loving and very calm.

Below is an exclusive 'behind the scenes' video of Josie working out and going through a padwork session with Ed (the director). This is just a snippet of some of the awesome training she went through, but the results were positive and very impressive. She was on a healthy diet, lost weight, looked leaner and got much stronger. Ed had a really strict training and body conditioning regime designed for Josie, it was very important to him as he wanted to make sure she (and any other cast member involved in a physical scene) was conditioned and prepared for her fight choreography as so not to get injured.
Josie says, "The best part of the film for her was the training, I thoroughly enjoyed that side of it."


Her performance as an assassin was exceptional!


Ed says, "Every cast member is special, it's what they contribute to Jet Slade: Rise of the Black Hood that makes it unique and special."


We really hope you've enjoyed reading this post, keep checking our page for updates.You can also visit director Edmahoo's new Blog Page, there are some interesting things on there. 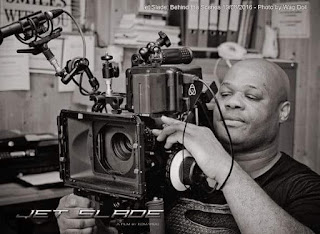