The great thing about being an actor, whether it's in a huge Hollywood Blockbuster or in an Independent Film, is you get to take yourself away from the real world for just a brief moment. For those lucky enough you get to learn to do some amazing things.

It's been an interesting journey for some of the cast in Jet Slade, some have already finished their scenes and moved on to other things. New cast members have been introduced and as we draw nearer and nearer to the final stages, director Edmahoo can finally see a light at the end of the tunnel.

WAG DOLL
Jet Slade: Rise of the Black Hood, is an action thriller.
Wag Doll (real name Bridgit) has put so much time and effort into Jet, that she has truly adopted and made her character her own. 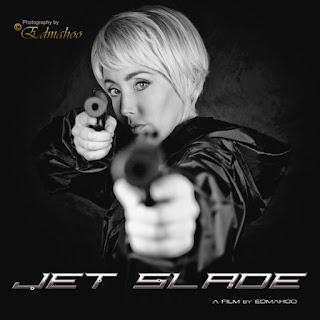 Not only has Bridgit gone through a physical transformation, her appearance also changes in the film (see image above). She has gone through different types of training for her character Jet and her fight choreography is becoming more intense as we draw nearer to the final scenes.

She is enjoying it and it is great to see all of the physical training she has gone through is being applied in her fight scenes.

(It must be fun being a lead actor, especially in an action film... you get to learn and do so many different things).
Director Edmahoo has really put Bridgit through her paces and she has learnt so much along this exciting journey. Not one for being in front of the camera, below is a rare behind the scenes 'selfie' of Ed with Bridgit after her martial arts and fight choreography training. 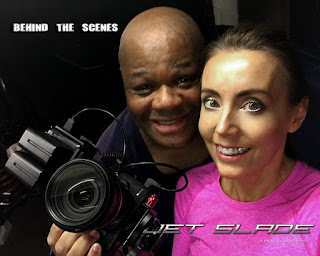 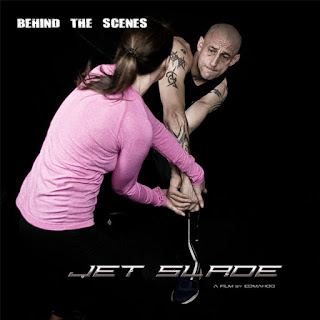 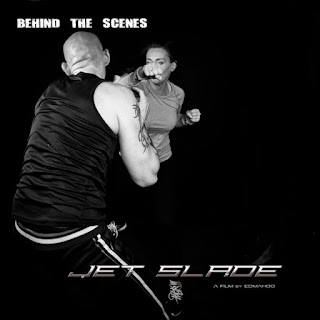 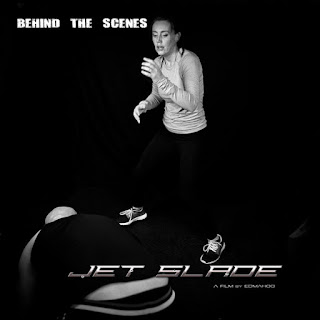 Here is a behind the scenes video clip of Bridgit and Dean rehearsing part of their fight choreography. (It has not been sped up, it is in real time).
Script rehearsals have also been going really well and we start filming a few scenes in the next couple of weeks. 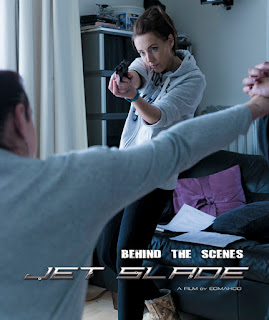 The cast are having so much fun and are getting on really well together! 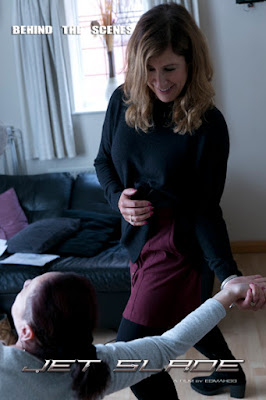 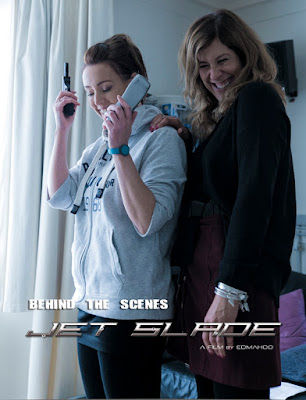 Rochelle on the right (above) is really enjoying the experience. 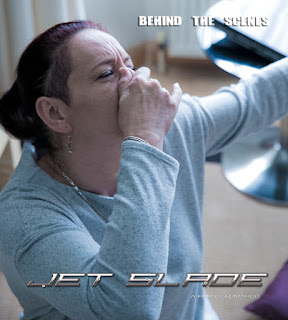 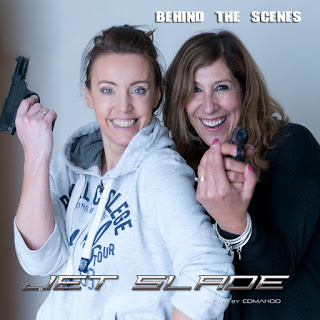 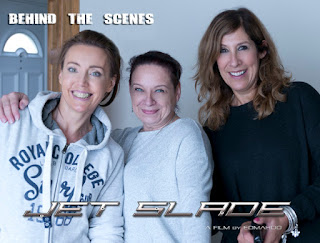 With new characters and cameos being introduced Rochelle has shown that she's got a lot more hidden talent inside of her than expected. She surprised director Edmahoo when she was recording her voice over and came out with a totally different approach to her character (see video clip below).
Last month we introduced you to two new characters making a special cameo appearance:
Reg Jones - Leeds Freestyle Kickboxing 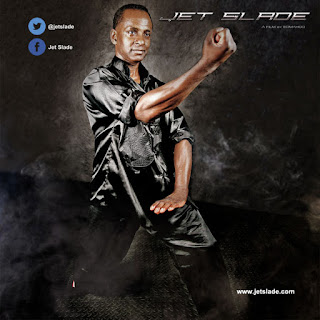 THE ACTION GIFs IN THIS POST WOULDN'T BE THE WAY THEY ARE WITHOUT THE GREAT TEAM OF TRUSTED STUNTMEN INVOLVE IN THIS FILM. A HUGE THANKS AND GRATITUDE GO OUT TO THEM TOO:
Stunt Coordinator and Choreographer - Edmahoo
Stunt Team - Matthew Rowley, Chris Dresser, Mathew McGregor, Lynsey Jayne, Dean Croft.


DEAN CROFT
Dean Croft makes his first ever appearance in our Indie film Jet Slade, he is accustomed to being in front of the camera and in front of a wide audience as he has competed in MMA, Kickboxing and currently has is boxing license and is an active fighter. Dean trains hard and is as the saying goes, 'Fighting Fit' 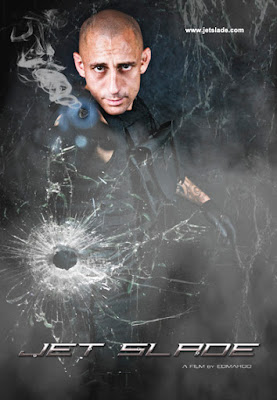 Dean and Ed (director) have known each other for a few years now as Ed commuted to York on frequent occasions to participate in a K1and Kickboxing class held by a good friend of his Mike Clarke. That is where Ed and Dean first met. They both have a passion for films and often share and chat about the latest action film or TV series on Facebook. Dean has also travelled to Ed's hometown of Leeds from York on a few occasions to participate in Ed's Freestyle Kickboxing class.
STATISTICS:
Name: Dean Croft
Age: 32
Height: 5' 10"
Weight: 75Kg 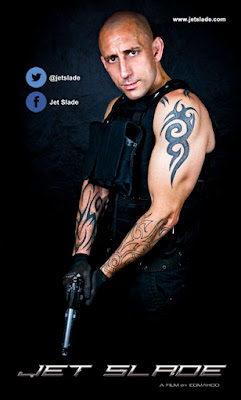 A family man and devoted father, Dean is married to Sally Croft and they have four beautiful children. Dean works very hard and is a domestic worker at York University, as an active fighter he dedicates his spare time not only to his family but also some how finds the time to train and compete.
He has competed in MMA, Thai Boxing, Kickboxing and is currently Boxing professionally.

Dean is enjoying the experience and his time working on Jet Slade not only that, he has realised there is a lot more involved when it comes to fight choreography and fight sequences when working on a film, including all of the safety factors that it involves. Collaborating with Ed and lead actress Bridgit has been an experience for him. We believe that Dean will be a good asset to any film project, bringing something different to the table, he is enthusiastic and brilliant to work with... Dean can be seen below at the intro of this exciting MMA Trailer from 2010 where he brutally knocks his opponent out. This is the sport that he's in.
(Filmed and Produced by Edmahoo)
HANNA FRACKIEWICZ 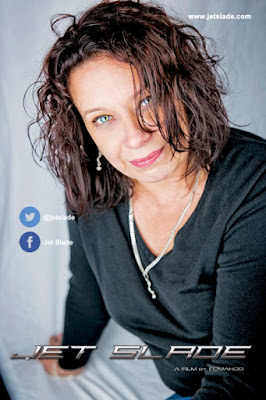 Hanna makes her debut appearance and is enjoying her experience working with Ed and the rest of the cast involved in her scene. She has even surprised herself and has been a joy to work with. 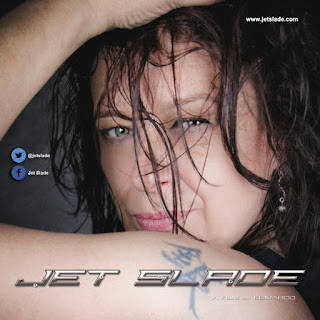 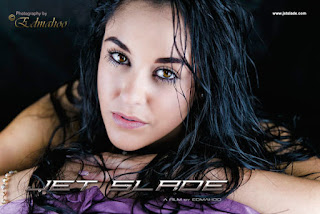 Melanie also makes her debut appearance in Jet Slade and it will be her first time (including Hanna's) working on a film project such as Jet Slade, she has learnt so much in such a short time and was interested in the technical aspects of the photography side of things and would ask Ed questions. Malanie likes to travel, she frequently commutes back and forth to Spain and has done so for many years. She enjoys going out with friends and having a good time and keeps in great shape by working out at the gym near where she lives. Melanie films one of her scenes shortly.
Click this link to see more fabulous photos of Melanie on our Jet Slade Facebook page.

Jet Slade: Rise of the Black Hood has a been a journey and an experience, but it's not over yet. As we approach the final stages of Phase III there is still lots of planning to be arranged and organised... Script Rehearsals, Locations, Fight Choreography etc.
There are still lots of cast member involved in this film of which we will revert back to as we near the end of our journey.

We hope you've enjoyed reading this post, thank you for following us and for showing your support.