Director Edmahoo has known Reg for 37 years and has been a student
of his for over 20 years.One of Edmahoo's proudest achievements
was when he was awarded his Black Belt 2nd Dan Grade.
The only one of Reg' students to ever achieve this honour.
(See image below). 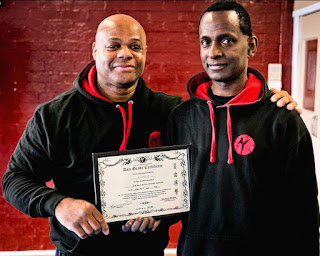 Martial arts is for life, not only that, it can take you a life time to scratch the
edges off the surface and still your journey has only just begun...
Reg has a very tough and strict grading curriculum and he only has a
handful of students that he feels worthy of being awarded a Black Belt.
[Jet Slade - Advertisement]

His knowledge and vast experience of Martial Arts is second to none and he
still challenges himself with the art to this date and is very skilled at it. 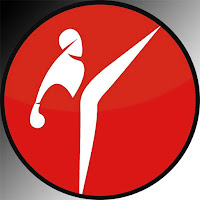 The above image is the new Freestyle Kickboxing Logo (LFK), though it hasn't
always looked liked that. It has changed over the years just like the art of Kickboxing.
Although Reg teaches the traditional form of Kickboxing at a high standard,
he also incorporates other Martial Arts forms and advanced techniques into his higher
grade students and this is why his style is so unique. 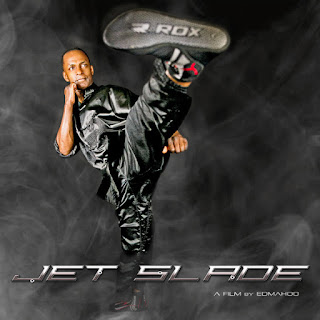 Jet Slade features a handful of Leeds Freestyle Kickboxing Black Belt students,
all original training partners and students of Reg Jones. Fight choreography has also been
devised by Edmahoo and his stunt team. Ed is really looking forward to working
and collaborating with Reg on the set of Jet Slade. 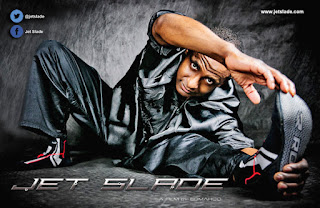 Reg has been training in Martial Arts for forty three years.
His first art being Lau Guar Kung Fu at St. Martins Institute, Leeds UK.
In the 1970's there weren't many Dojos and most instructors would hire out a
hall in the local community centre, school or church hall.  At those times
Martial Artists such as Jim Kelly, Ron Van Clief, Chuck Norris
and the legendary Bruce Lee were inspiring the world on the big screen with
their different Martial Arts fighting style and Kung Fu skills. This was new, it was
fresh and it was something Reg inspired to become... a Martial Artist.
[Jet Slade - Advertisement]

When Kickboxing was new on the scene, Reg first met
George Wellington, his first proper Martial Arts Instructor and
switched to him sadly, until his untimely passing...

(Martial Arts has been the centre of so many action movies and it has inspired
film makers to incorporate and introduce a fighting style of some form into
so many different action fight scenes).

Reg is a 4th Dan Grade Black Belt with Alfie Lewis and
has studied various styles during his journey including:
Taekwondo with Kim Stones
Jiu Jitsu with Mabs Alam
Karate, various instructors
Kung Fu Weapons/Forms with Andy Norman
Tai Chi with Bob France
Boxing, Self Defence and MMA
Reg considers himself to be a modern Martial Artist and would borrow/adopt
techniques from any style if they suited his purpose.
[Jet Slade - Advertisement]

With the script and storyline already written and prepared, Reg starts rehearsals
and fight choreography very soon. He will be joined by another talented Martial Artist
(seen on the right in the image below). 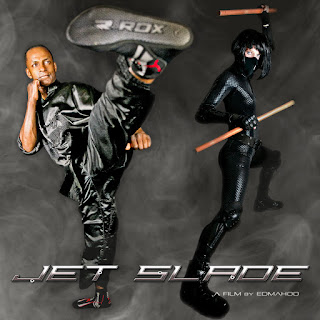 We hope you've enjoyed reading this post, look out for our next special
Exclusive News Update coming very soon!