Jet Slade: Behind The Idea 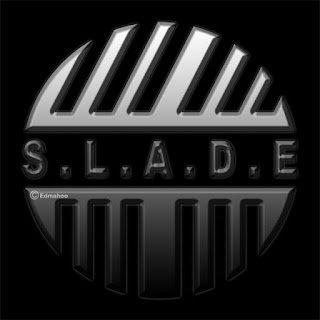 (Click on SLADE Emblem above to view trailer).
An Extended version of the above trailer and other clips can be seen on our Facebook page.

S.L.A.D.E stands for 'Special Liaison Assault & Defence Enforcer'
(Enforcement Agency for the Organisation).
Film Synopsis.
Organised crime and corruption has been wiped out and what is left of it has gone underground. The city is once again a safe place for good working class citizens to roam freely without fear.  Protected by an elite law enforcement agency known as 'S.L.A.D.E' (Special Liaison Assault and Defence Enforcement agency), they patrol the city protecting it's citizens.

Recently, there has been a dark cloud overshadowing the city and mysterious unexplained occurrences have been happening. Something sinister is stirring in the shadows and the people are in fear of their safety. Underground crime and gang lords are being wiped out and only the brave who dare to stand up to this mysterious new society known as The Black Hood', are threatened or even found murdered... Fear and corruption has once again returned to what was a peaceful town.

But have the Black Hood Society overstepped their mark by sparking off a chain of events that is to overspill and upset the SLADE agency, and will what remains of the Enforcers be ready and equipped to handle the rein of terror that is to come down upon them?

Only one highly trained and experienced ex Enforcer with a troubled past is equipped to deal with such a situation, but will 'Jet' (played by Wag Doll) be strong enough to handle what's coming her way, or will she have to release the demon inside of her once again to take on this society of deadly assassins!

With unexpected twists and turns, Jet Slade: Rise of the Black Hood will have you sitting on the edge of your seat! 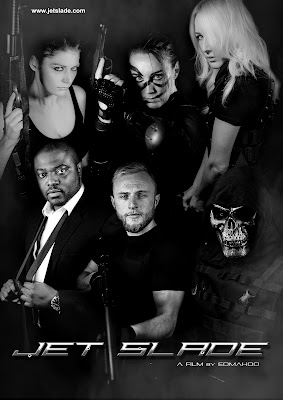 INTRODUCTION:
"It's not easy telling people and your friends you're a filmmaker, especially from people who don't see you as a filmmaker and know you for something else. They can't quite grasp the fact that you enjoy making films... This is usually a bit of a shock to them, so I try not to bring it up in a conversation."

In 2012, director Edmahoo had this crazy idea of wanting to make an action film featuring a strong female character as the star, supported by other strong female characters. He also wanted to make sure it was filmed in his home town of Leeds and in the Yorkshire region... It wasn't until 2014 that he really started putting his ideas down on paper. He has been unorthodox with the way he has put  his ideas, storyline and scripts together... But it has been very successful in putting the final stages together. A big movie goer and fan of the big screen, he allows himself to get lost in the excitement of the film and is not one to analyse a film while he is watching it, but just loves the whole concept of how it is put together and what goes into something like a big and successful movie.
He has finally got to a stage where he can think of an idea, write it, convert it into a script, relay it to the actors and visualise it before it reaches filming stage. Every director has a vision or take on how they think a film should be portrayed, this is their vision through their eyes. Some get it right and unfortunately they get it wrong too. This doesn't mean to say that they're a bad director, maybe that film/script wasn't for them... It's a huge responsibility to take on something like this. 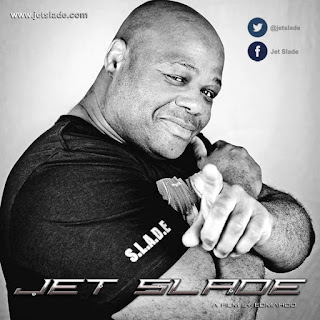 PLANNING:
Like most projects, planning is key! You can't commit yourself to something that you yourself are not 100% committed to, your crew and cast need to see that in you for them to trust in you. It's not going to be easy as you will come across many hurdles along the way, it is how you deal and handle them is what will make or break you... Have patience, think before you speak, take/detach yourself away from a situation and try to look at it from a different point of view, as you can sometimes see things differently. be passionate about what you believe in and try to stay focused.
ORIGIN:
Originally Jet Slade was only supposed to be a ten minute feature, but after filming the first scene Ed realised that he was going to need more tape as the scene when edited took up six minutes! This made him realise that the film was going to be much longer and bigger than he expected. That's writing for  you, the more you get into it the more you lose yourself in the storyline. 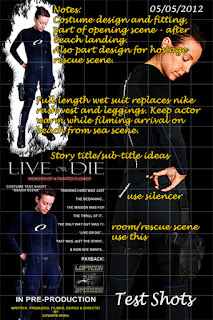 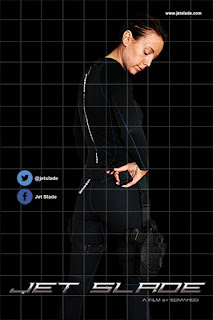 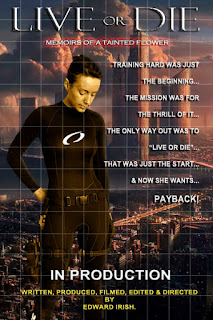 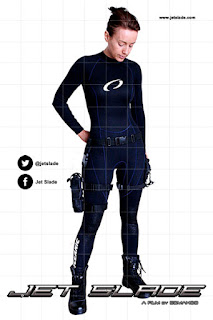 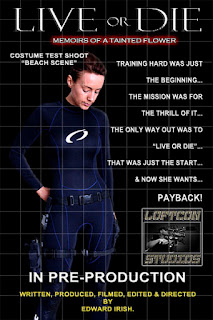 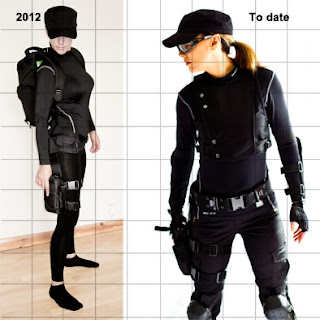 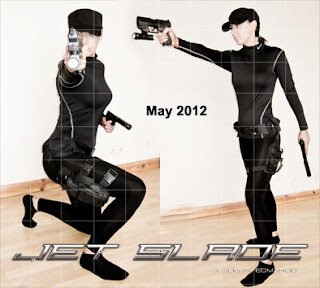 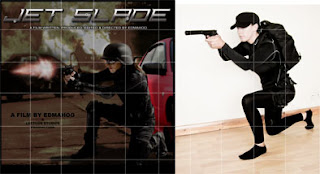 The above images are just some of the amazing concept designs for Jet Slade.
Choosing the right female character to play the lead role of Jet wasn't going to be easy, Ed wanted her to be the strong quiet type but yet have that spark to inspire other women. His character had to be believable or else no one would take what he was doing seriously. Careful planning went into creating his character, and when he sat down with Wag Doll and explained his concept, she was "Well hey, sounds exciting let's give it a go."

CREATING THE CHARACTER: JET
The look and style was very important to Ed, whether it was an action scene or just a casual scene, Jet had to look the part. A lot has changed over the years and finally Ed had the look he wanted for his lead character. The rest just followed and it all started coming together. 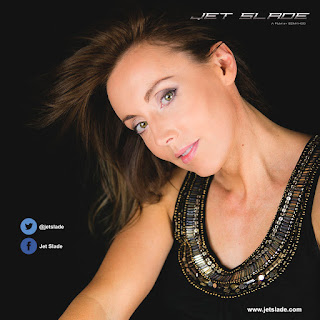 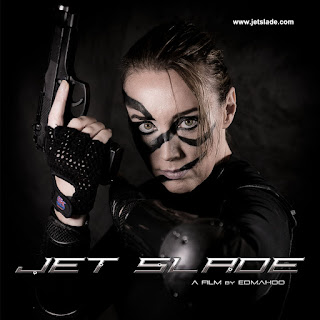 Wag Doll underwent a massive body transformation in order to get herself into character. Look out for a future and exclusive interview with her as we get closer to wrapping up production.
Here is a link to her website, she tells you how she went through a strict diet which she named
"The Wag Doll Protocol: Eating Clean and Looking Lean"
Below is just a glimpse of her training for her character Jet Slade,
(Look out for a future and exclusive interview with her):
SLADEs Are an Elite group of highly trained Enforcers from around the globe, patrolling districts in their area/region. As you've gathered by now, this film features a more female dominant cast. That's the way Ed wanted it, making the fewer male characters important to the film stand out. Like comic characters, each cast member has a background/a story to tell, making it easier for any future films to be made.
CAST:

Jet Slade is an action thriller with twists and turns, tragedy, future, present and past. It will have you thinking and sitting on the edge of your seat all the way through. Below are just some of the cast members starring in this feature and if you've been following our News updates you'll have become accustomed to them by now... Look out for surprise Cameos coming to Jet Slade: 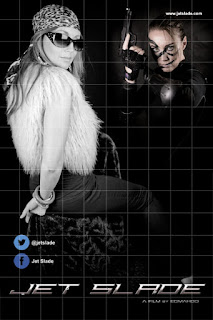 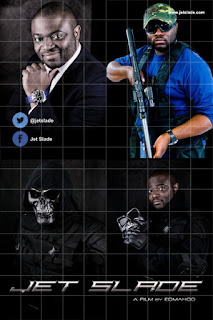 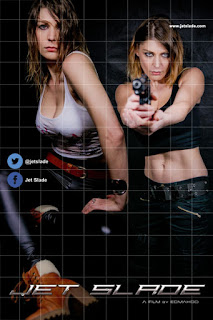 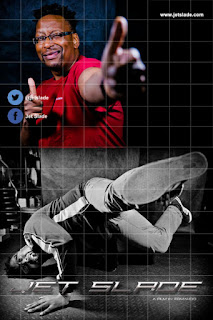 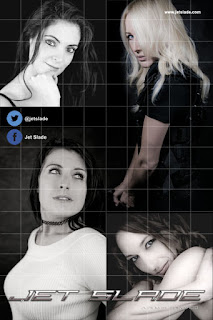 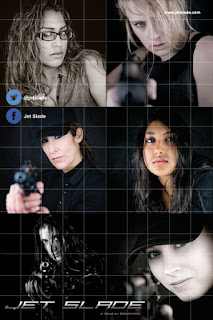 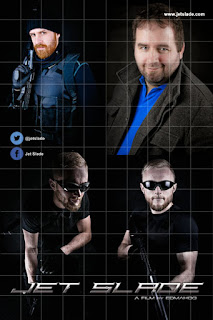 PRODUCTION TEAM:
This film has no Production Team! It sounds a little strange and unusual to what you're accustomed to but Ed the director has produced everything himself. Below is a list of the work he's been doing to get this film off the ground:-


The list just goes on... It's a huge project to take on when  you look at it this way, but Ed was prepared and he had done his homework... He is truly a Solo Filmmaker.

THIS FILM PROJECT HAS NO BUDGET OR ANY FINANCIAL BACKING WHAT SO EVER!
Ed wanted to prove, if you have an idea and a little creativity inside of you and a little understanding, you could put a story together and create a feature. A lot of hard work, time and graft has gone into the creation of this project, Ed hopes this website will inspire any budding filmmaker to follow their dreams and realise that it can be done.

Jet Slade is becoming one hell of a ride and the cast are really enjoying themselves, we really can't believe how they've taken to their characters so well... It's like a drug to them, they're so enthusiastic and give their part 110%. Ed couldn't ask for anything else, they're all stars in his eyes, some exceeding his and their own potential.

Rehearsals and preparations have been the key and backbone of this project and Ed has really devised a format that he can work to, considering he is doing everything himself.

It's been fun and just by viewing the GIFs as you've been reading this post, you start to realise how much time, effort and hard work Ed has put into this project. But it's not over yet, 'Phase III-The Finale' is heavily into production and Ed is determined to have all of the scenes filmed this year.

We hope you've enjoyed reading this post, we really appreciate you taking the time to read and follow what we do. keep checking our website, Twitter and Facebook pages for up to date information about Jet Slade. You can also see what Director Edmahoo is up to on his Twitter too.


We leave you with our second Teaser Trailer, we hope you like it. Look out for our final Trailer coming up as we get closer the the completion of this exciting journey.
Thanks, Jet Slade Team!