Actress Ayesha Latif voices the new Jet Slade: Rise of the Black Hood Trailer 2.
Originally from Birmingham UK, she has adapted very well to her character. 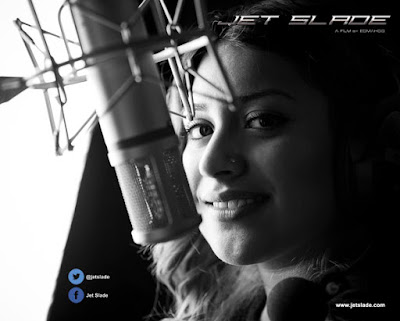 Phase III is heavily into its production stage, director Edmahoo is working very hard on the final stages of the storyline and scripts. We're amazed how one person can adapt himself to all of the different roles, but he's doing it!

He promises an explosion of a trailer for the final trailer (trailer 3) and says, "You'll get to see everyone involved in the film in the upcoming trailer, Jet Slade is filled with twists and turns and I know you're going to really like it."

Ed wanted to use as many people who had never had any prior acting experience, and by his guidance and working together produce something special, not only just for himself but for the rest of the cast. He believes that everyone has that special something in them and if they believe in themselves, then you can make any dream possible if you give it 100%.

The cast have learnt so much by working with Ed and he hopes they can use what they've learnt and continue to pursue their dreams.

Let's not waste any more time!


Here's the first and exclusive look at the new Teaser Trailer 2 for Jet Slade: Rise of the Black Hood.

We hoped you like our new teaser trailer, look out for more updates from Jet Slade.

Here's our first trailer if you missed it. Jet Slade: Rise of the Black Hood Trailer 1