From Storyline to Script to Screen

With filming for Jet Slade planned to wrap this year,
we take a quick look into how Ed the director
gets his ideas from paper to film.

Not seen our first trailer for Jet Slade yet? 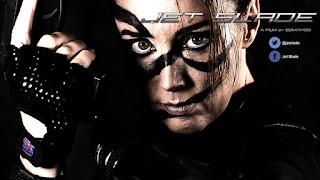 When you watch a film, you don't realise how much
work and effort goes into it until you start breaking
down a scene or experience it for yourself.
A scene itself can contain so many elements which
are crucial but subliminal to us (the audience) and it is that
what adds to and makes a scene...
It all depends on the mood/genre/style of the scene/film...

So... "When you go to the cinema to watch a movie,
does this spoil the enjoyment?"

Ed doesn't seem to think so, as he goes with the
intention to enjoy the film and not to analyse it.

Vision
Having a vision (idea) of how you want your scene
to look can really help, especially when writing the storyline.
Ed has a special place where he likes to write down
his ideas for the storyline and scripts.
He still uses a notepad to write down all of his ideas
and then types them up in a word processor.
If you can find somewhere that helps you write
and be creative, then try and stick to that special place. 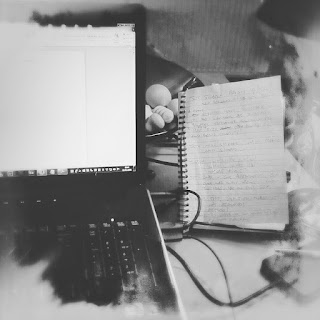 It all sounds very easy, but when you're a 'solo filmmaker'
and having to make all of these decisions yourself,
it's quite a lot to take on, so make sure you're
geared up and know what to expect.

Motivation
What motivates you?
There are going to be times when you hit a wall.
Don't be afraid to be versatile, have an open mind.
Writing can be fun and exciting, you are in control of the story.

Getting Started
Jet Slade is written, produced and directed by Ed,
so he already has an idea in his head of
what he wants the scene to look like.

Synopsis
He usually writes a synopsis for his actors to read
at the top of each script, so they have an insight to what
the scene is about and what he expects from them...

The Norm
He doesn't follow a set routine and is very spontaneous
in his work, the actors never know what to expect
but have come accustom to his unorthodox way or working.

He has a saying... "If it looks right and sounds right,
then it must be right." But it's not that simple!...
A lot of effort, time and thought does go
into it to it to make it look right.

Briefing
Ed usually sits down with the cast and runs through
the storyline and explains to the actors what the
scene is about. It might be a continuation from a
previous scene that they've just filmed
or a totally new scene.
Scripts... 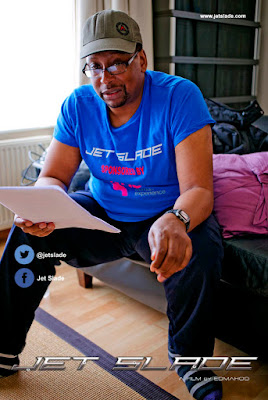 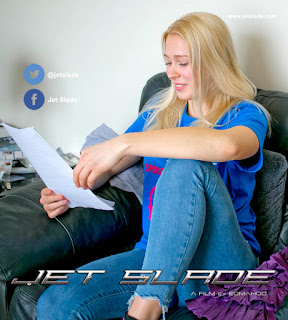 Like most scripts, he uses numbers beside each of the
characters names. This helps in rehearsals,
it's much easier to say, "Take it from number '10' etc."
It keeps the momentum going.

The actors usually walk through their lines while Ed listens.
Once the actors know what they're doing and maybe
a few tweaks have been made to it here and there...
Ed then starts adding the actions and phrases etc. 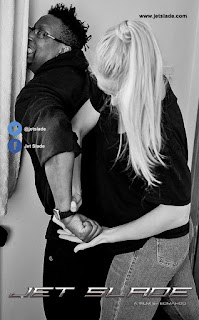 (Once the actors have rehearsed their lines, usually
after a couple of rehearsals, Ed takes their scripts away from them).

An action can be grabbing the hand or arm, folding the arms,
putting a hand on the table or chair etc...All these minute
things come into play. 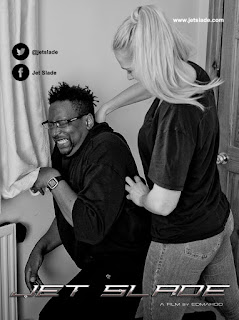 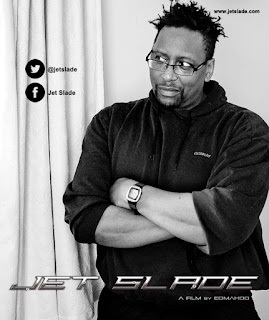 Depending on the storyline, depends on how long
rehearsals last. If there is a fight sequence involved
then it takes much longer. There is always a final rehearsal
before we film and Ed explains in detail what he
wants the actors to wear (costumes)...
The location is planned and arranged weeks in advance.

Rehearsal
Rehearsals are a must! You can't go onto a set just by
reading a script and think you're going to nail it
straight away, as that will never happen, it's too time
consuming and unprofessional! There might be a situation
on set while filming when something just isn't right
and Ed may decide to make a few alterations on
the spot! Take the time to find out about your
character and try to get to as much
rehearsals as possible. 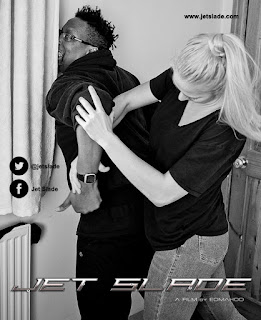 Who Are You?
To finalise... The common mistake a lot of new actors
make and get confused with is their identity. Some find it
very difficult and struggle to take themselves away from
them self when portraying a  character.

They have to realise they're not themselves,
they're a character it's only acting!

We really hope you've enjoyed reading this post,
keep a look out for more updates with regards to Jet Slade.
We hope it's been helpful in some way and gives
you a helping hand to guide you on your way to success.