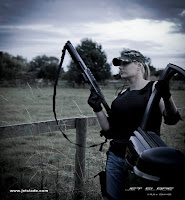 Here at Jet Slade we like to help, support and push our cast and hopefully guide them in the right direction.

Katie joined the cast of Jet Slade back in July 2014. Since then she has come on leaps and bounds and it's amazing to see how she's progressed not only in her acting ability, but also in confidence.

A keen Rugby player, her sporting background has helped and contributed to her character, as some of the scenes contained physical and action sequences.

Her personality is that of being 'one of the lads'... I think this stems from her being the physio to a group of strapping young men to  her local Rugby team, and has had to adapt to suit. Katie is a strong woman and she challenges herself to be better and better every day. She can sometimes have the  naivety of a child, which can be cute as she's always asking so many questions and wants to learn. She is determined and will go away and practise to perfect her skill. This could be the competitive streak she has in her from playing Rugby.

In the past year Katie has gone through so much and has battled with a few personal issues, only to take them on and battle through it like the warrior she is, and injuries from a broken ankle, arm and nose.  She's a magnet for injury!

Since joining the Jet Slade family, Katie has come on leaps and bounds and to witness her go through this transformation has been phenomenal.

We say to all our cast, "Jet Slade is about meeting new people and challenging yourself to do something totally different, out of your comfort zone and being part of something special you never thought possible."

It's surprising because, the total opposite has happened... we're also experiencing the exact same experience!

Katie has bonded really well with some of the cast. She has a heart of gold and is so keen to please that she will put herself out and help in any way she can.  She is currently studying psychology and is making plans to take a year out next year when she finishes her course to travel Australia... she will be missed!

A year can go by quickly. Since then Katie has matured in so many ways... She has grown in confidence and since then, apart from playing Rugby, has participated in an all women's charity (white colour) boxing event, taken up kickboxing and has also joined a casting agency and can also be seen here. She has appeared on Emmerdale (as an extra) a popular local TV Soap, been part of an indie film and is preparing to feature in a music video.
Katie seems to have found her knish, and that's to become a budding actor in film. She has transformed in confidence from a tomboyish personality into a beautiful and elegant strong woman.

If you're reading this, then we have done our job correctly as you are interested in taken her on.

Click to see Katie in a scene from Jet Slade: Out-take 01

Click to see Katie in a scene from Jet Slade: Out-take 02

Look out for more Actor Profiles from Jet Slade in the future.
For any more information, we have a contact feature on the side bar on the right hand side of our web page.